Did you buy a computer or an equipment today? Wonder what if you had to sell it off in a year or two? How much would you get? No matter what you own, it won’t be of the same value tomorrow as it is today.

Before we start with the whole Double Declining Balance Method though, let’s look into what depreciation is all about. If you are new to the term, here is what you need to know; Depreciation is the reduction of a fixed asset’s registered cost using specific methods until the value of the asset falls extremely low.

When we say ‘fixed assets,’ we mean buildings, office equipment, furniture, machinery and more. However, although the land is also an asset, we do not include it in the list because it is an asset that cannot be depreciated. The value of an asset such as land appreciates over time unless there are other environmental reasons for devaluation.

Here is a video that talks about it in detail. 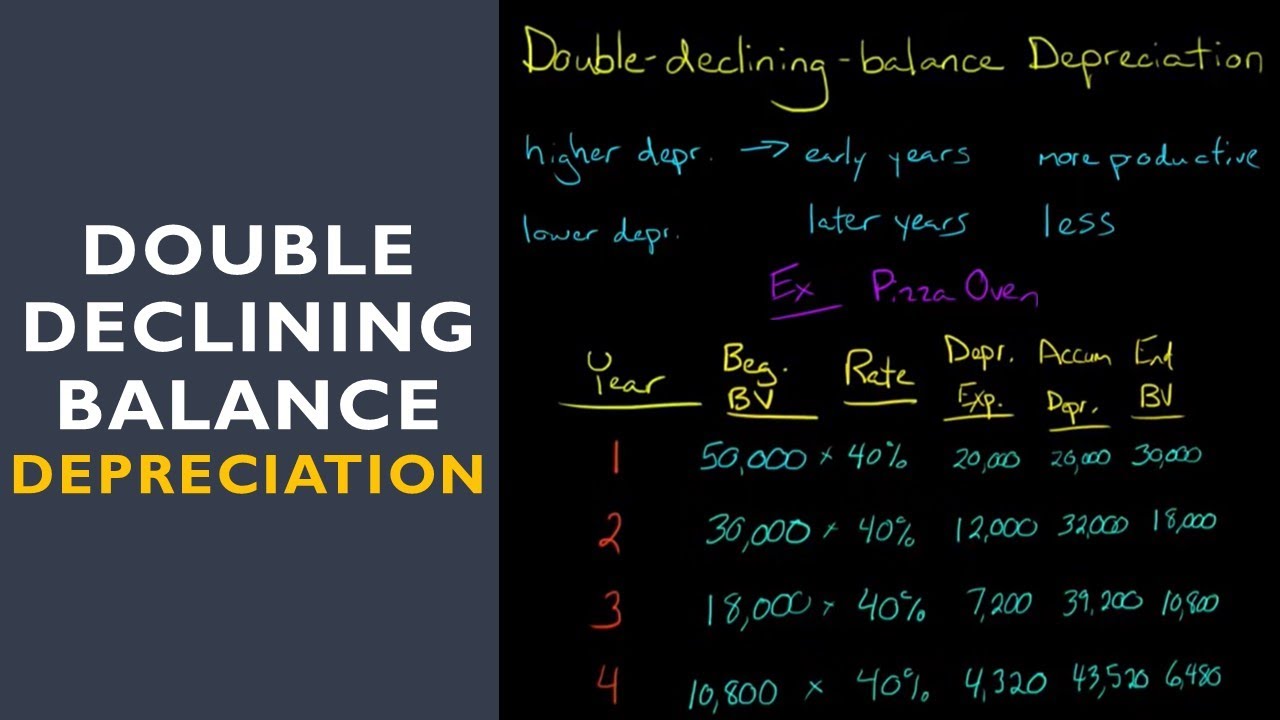 To determine the value of an asset, you have different types of depreciation methods and formulas. Few common ones are as below:

*Book Value – An asset’s book value is its worth at a given point in time. It is equal to the asset’s cost basis, minus the accumulated depreciation amount.

The benefit and reasons for each method are different, and using the right one that suits your business depends on the type of asset you have. While the straight line depreciation method sounds the most convenient to use with streamlined accounting calculations, the declining balance method provides you a precise accounting of the asset’s value.

In a nutshell, depending on the nature of the assets and your company’s choice, you can pick one best-suited depreciation method.

The purchase of an asset might not always happen at the beginning of the accounting year. Sometimes, you might have to purchase some assets in the middle of a fiscal year as well, and this complicates the calculation a bit.

Further, to extract the amount of the asset’s monthly depreciation, divide the total anticipated depreciation for the year by 12. Multiply this amount by the number of months of the fiscal that the asset was owned. The result will provide you with a total amount of depreciation for a partial year.

Note: Each asset you purchase will be depreciated differently. You will need to be mindful of which method you are using to depreciate an asset before you start your evaluation.

WHY SHOULD BUSINESSES RECORD DEPECIATION?

So, now that we know what depreciation is, and different kinds of methods of determining the value of assets are, here is why businesses should record depreciation. Understanding accounting concepts will help your business do more.

As explained above, the purpose of depreciation is to match the revenue generated by an asset for the business, with the cost of the fixed asset during its useful life. Further, the cost of the asset is moved to the income statement from the balance sheet during that time.

What if we don’t use depreciation in accounting? In such circumstances, we will be required to charge whatever assets we buy, immediately after.

The drawback of not using depreciation in accounting also leads to an overstatement of assets and net income in the balance sheet and income statement respectively. Other repercussions are that the cost of the fixed asset isn’t considered while setting the sales prices, and since the established prices won’t be high enough, the cost of the fixed asset may not be covered as a result.

WHAT IS A DOUBLE DECLINING BALANCE METHOD?

This method also takes the depreciation charges in these initial years and lowers profits on the income statement, instead of considering those later. Reason being, most of the assets loses its value after some time.

HOW DOES DOUBLE DECLINING DEPRECIATION WORK?

As per the GAAP (Generally Accepted Accounting Principles), public companies record expenses in the same period as the revenue generated from those expenses. For example, if a public company has bought an expensive asset and will be using it for several years, the entire asset expense is not deducted in the year of its purchase. The deduction is divided into many years.

This is beneficial for assets that lose its value over a period, because though the depreciation expense of the asset might be larger in its initial life, but it will become smaller later.

HOW TO CALCULATE DEPRECIATION UNDER THE DOUBLE DECLINING METHOD?

Being an entrepreneur comes with its risks. To be able to apply the double declining depreciation formula, you are required to know the asset’s useful life and price first.

To summarize we may look at the below pointers:

For example: If you have an asset that values $50,000, you’ll estimate the salvage value to be around $5,000 in five years, by the time you are ready to sell it. That would mean, you will depreciate $45,000 over these many years. You will sell the asset for $5,000, and remove the asset from your accounting reports.

WHY WOULD A COMPANY USE DOUBLE-DECLINING DEPRECIATION ON ITS FINANCIAL STATEMENTS?

You need to take a look at the economics basics to understand and answer the question. Using double declining balance depreciation on the financial statements allows a constant blend of both depreciation expense and maintenance and repairs expense, during the asset’s useful life.

In such cases, the company reports lower net income during the useful life of the asset, which is pretty early and is mostly not deemed acceptable.

To understand how to adjust the depreciation charges on your balance sheet, income statement and cash flow statement, let us take an example of a machine that you purchased for a vital purpose in your company:

Recording your depreciation every month will keep your financial statements updated. As and when you register the depreciation of an asset, the depreciation expense and accumulated depreciation along with the net value of your fixed assets will show in the profit & loss statement and your balance sheet respectively. You will be required to record these expenses in a journal entry.

To prove that you own the fixed assets, you’ll need to own enough documentation, like title documentation or contracts, purchase receipts, and others as proof. Along with that, to track each asset, you will also need to create a depreciation schedule.

You might need to focus on this especially if the amount of depreciation you log in the accounting, varies from the one that is logged for tax purpose.

What is a Depreciation Schedule?

A depreciation schedule breaks down a firm’s long-term asset’s depreciation. This is a calculation of the depreciation expense for the assets you purchased and then distributes the cost over the useful life of those assets. These schedules are not just for computing the expense but also to track the starting and ending accumulated depreciation.

This schedule allows a firm to track its long-term assets and analyze the depreciation over time. You may conclude saying that it’s a description of the assets you purchase, it’s purchase date, cost, it’s useful life and its salvage value.

Xem thêm:  AIM Shuts Down After 20 Years Without Ever Making a Dent in the Business Market

When the asset is off its useful life, and you are planning to sell it, the accumulated depreciation amount is reversed, along with the actual cost of the asset. This eliminates all the record of the asset from the balance sheet of your company.

ADVANTAGES OF USING THE DOUBLE DECLINING BALANCE METHOD IN ACCOUNTING

Although double declining balance isn’t used for tax purposes, a lot of companies apply this method for their internal accounting. Depreciation helps your accounts if you are planning on purchasing expensive assets.

This method represents the value of electronics and cars precisely compared to other methods. It’s because vehicles, devices, furniture and some other types of machinery lose value pretty quickly.

DISADVANTAGES OF USING THE DOUBLE DECLINING BALANCE METHOD IN ACCOUNTING

Now that we learned about the advantages, below are a few disadvantages as well to consider before we move further. The double declining balance method also has few drawbacks over the straight-line depreciation method:

When we talk about the term ‘depreciation,’ it’s understood that it is a method that reduces a fixed asset’s registered cost until the value of the asset falls extremely low. If you purchased a truck for delivery of your goods from one place to another, look at how you will be using the truck to sell the goods.

You can assume the expense to charge on both the truck’s worth by the end of its useful life and its lifetime. These assumptions will affect the book value of the asset as well as the net income, and will also influence the earning of the asset after selling (if you would), for profit or loss compared to the book value.