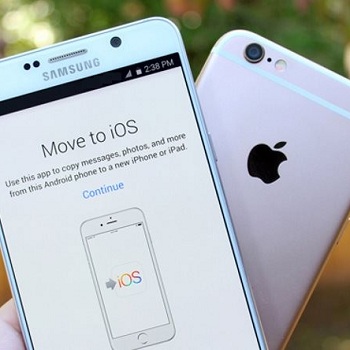 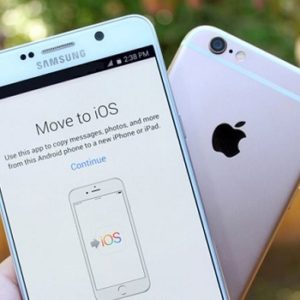 Moving from Samsung to iPhone.

If you’re an Android user that plans to switch to iOS to try out the iPhone, you don’t have to worry about the hassle of transferring your media and important electronic information anymore. Moving from one operating system to the other is now more simple than ever. You can easily transfer all your camera photos and videos, contacts, message conversations, mail accounts, calendars, web bookmarks and even the free apps that are available on both Google Play and App Store.

Only the paid apps that you’ve purchased from Google Play are lost. In fact, they’ll appear in your iTunes wishlist if they have a match on the App Store. The only downside is that you have to purchase them again for the Apple ecosystem. All this is done with the help of the Move to iOS app introduced along with iOS 9. Read on and get a step-by-step guide for easily switching from your Android smartphone to iPhone, iPad or iPod touch.

Move From Android To iOS Requirements 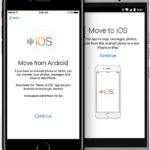 Before you begin you have to be aware that you have to meet the following hardware and software requirements to be able to ensure the flawless data transfer between your old Android smartphone and your new iPhone:
– Your Samsung, LG, HTC or any other non-Apple smartphone has to run Android 4.0 or later.
– Download Move to iOS on your old device.
– You need an iPhone 5 or newer model, iPad 4th generation or later, iPad mini 2nd generation or newer, iPod touch 6th generation
– The iPhone, iPad or iPod touch has to run iOS 9 or later.

Move From Android To iPhone Tips 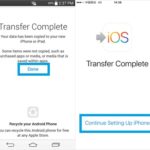 – For the process to work successfully make sure that the Android device is connected to a Wi-Fi network. (Close carrier data connection). In fact, you can bring your old smartphone into Airplane Mode, to avoid any incoming calls that could disturb the transfer.
– Connect both old an new smart devices to a power source. Depending on the size of the files, the migration process can last for a while.
– Make sure that the content on your Android device (Micro SD card included), won’t exceed the storage space available on your new iPhone.

How To Move From Android To iOS 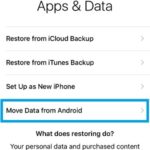 Here is what to do, assuming that you have both smartphones nearby and prepared for the transfer as instructed above:
1. Set Up New iPhone: Grab your new iPhone power it ON, by pressing the Sleep/Wake button available on the right side of the case. Begin the setup process and look for the Apps & Data option. Here you have to engage the Move Data from Android option. Now, continue to Step 2.
Fact: If you’re iPhone is already set up you have to erase all content & settings and start from scratch. The Move to iOS process can’t be performed if the new device isn’t fresh.

2. Move to iOS app: Take your old Android smartphone and launch the Move to iOS app. Hit Continue. You’re prompted to review the terms and conditions of this process. Agree with them to continue. On the Find Your Code screen, tap Next (available in the top-right corner). 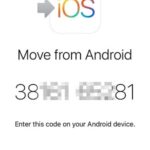 3. Get Transfer Code: Return to your iOS device and tap on Continue, in the Move from Android screen. A six- or ten-digit code will be displayed on your iPhone’s screen.
Fact: At this stage, your Android smartphone might prompt an alert that complains about weak Internet connection. Ignore it!

4. Use the Code: Type the code displayed on your iPhone, on your Android smartphone to validate the transfer. If your input is successful, the Transfer Data screen will appear on your old device. 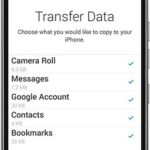 5. Select and Transfer: Now it’s time to select what content you want to transfer from Android to iOS. Tap Next when ready. Now it’s time to sit back and relax until the migration completes. The status of the moving process is displayed with the help of a loading bar on your iPhone.
Tip: Continue to be patient and don’t touch the two devices if the Android phone shows that the process is complete, but the iPhone is still showing that the transfer is in progress.
Fact: Duration is directly influenced by the amount of files that you migrate!

How To Get Apple Maps Cycling Directions On iPhone & Apple Watch