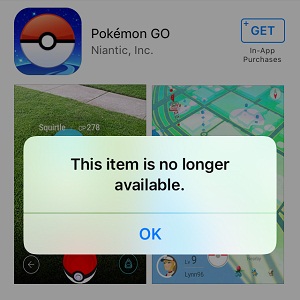 Pokemon GO is currently becoming available for download all over the world, but many users have asked us to cover the “This item is no longer available.” App Store error. From our findings, it seems that this download issue occurs in those App Store markets that the game is fresh released. As you might know, Nintendo’s blockbuster has been releases first in Australia and New Zealand on July 6 and a few days later in the United States. Germany and the United Kingdom followed and more and more countries become available each day.

So, if the Pokemon GO has just been released and you’re trying to download it from the App Store in the same day, there are high chances that the Apple servers are overloaded and you are getting the above mentioned download error. It’s something similar to every important iOS release. If you’re trying to update OTA (over-the-air) just as the firmware is rolled out, you are likely to get a similar download error message. 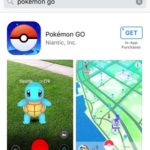 The bad news is that there is nothing that you can do about it. However, don’t panic, this isn’t a Flappy Bird type of move! Pokemon GO hasn’t been retired from the App Store! The good news is that the game has become available for your country and it’s only a matter of hours until you will be able to start playing. Just keep tapping that App Store download link until you get your lucky break and can start chasing Pokemons on the streets of your own neighborhood.
Until then you might wanna inform yourself what you’ll have to do in order to have a successful start to playing this latest gaming addiction. Here are some Pokemon GO tips for beginners.

Tip: If the app is really new, like a few hours old, on the App Store market of your country, your only way to find and download it is via the Search feature, or by tapping the direct link provided above!

Fact: After you get past the App Store download fever, you should prepare yourself for the overloaded Pokemon GO servers. First time players need several attempts to sign up for an account and manage to meet Professor Willow!