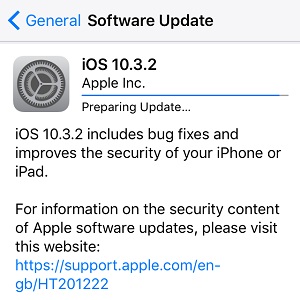 Apple has just seeded another update for the iPhone, iPad and iPod Touch operating system. It’s a scheduled upgrade that comes to fine tune the 10th iOS generation. iOS 10.3 was released six weeks ago along with the much awaited APFS file system, as well as the Find My AirPods feature. It was followed, ten days later, by iOS 10.3.1, an emergency release, that came to patch a Wi-Fi security flaw.

iOS 10.3.2 is advertised as including bug fixes and security improvements. All changes seem to be under the hood, as we couldn’t detect anything spectacular during beta testing. The single noticeable change is the SiriKit car commands fix, which now allows the functions to work as intended. However, we do recommend you to upgrade as soon as possible to this latest version to improve your iPhone’s and iPad’s stability and security. 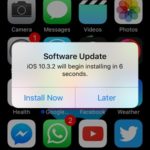 The newest iPhone operating system version is available over-the-air. Grab your Apple smartphone or table and tap on Settings. Choose General and enter the Software Update menu. Allow your device to inquire about the update. Tap Download and Install to proceed. Be patient until the 168 MB file is downloaded to your iOS gadget. If everything meets the guidelines installation will start automatically unless you decide to postpone. Sit back and relax while the loading bar is performing its cycle and the iPhone reboots.
Tip: If Battery level is below 50% you will need to plug-in to a power source before proceeding with installation.
Fact: Curiously the iOS 10.3.2 update does not require you to Agree with Apple’s terms and conditions after tapping the Download and Install label.

Important: Although iOS 11 is only a few weeks away from being introduced at WWDC 2017, iOS 10 will continue to power iPhones and iPads until this fall, when beta testing of the 11th iOS generation is concluded! This means that iOS 10.3.2 won’t be the last iteration. Stay tuned for more updates.

Xem thêm:  How To Fix Email Alias Not Working In iOS 14 Mail App