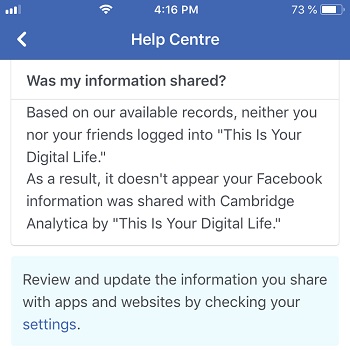 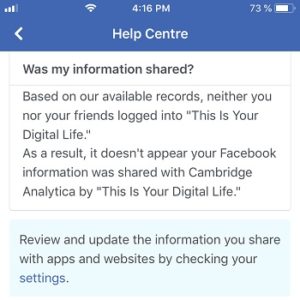 Facebook is in the middle of a monster scandal involving precious user info leakage to third parties that used the data for political reasons, which go as far as influencing the U.S. presidential elections from the autumn of 2016. According to official numbers up to 87 million people (70 million of them being United States citizens) have been involved in the Cambridge Analytica scandal. The British political consulting firm has taken advantage from Facebook’s security flaws.

If you or your Facebook friends have awarded permissions to the Facebook app “This Is Your Digital Life” you have been most likely been influenced by Cambridge Analytica in a certain political direction! Zuckerberg’s company is now trying to save what there’s left to be saved from this huge letdown involving, probably the most popular social networking service on the Internet! 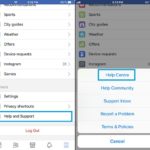 Facebook has just started offering a tool that allows users to inquire if they’ve been exposed to the Cambridge Analytica data leakage. All that you have to do is grab your iPhone or iPad and follow the steps listed below:
1. Open the Facebook app from the iOS Home Screen.
2. Tap the “Menu” icon available in the bottom-right corner of the screen.
3. Scroll all the way down to the Help and Support section.
4. Tap on Help Center, available in the slide-up prompt.
5. Type the keyword “cambridge” in the search area.
6. Tap on the “How can I tell if my information was shared with Cambridge Analytica?”, suggested result.
7. Check the result and find out if you have been affected!

Important: You probably never heard of the “This Is Your Digital Life” Facebook app. But be aware that in other countries that haven’t been targeted by the British company only 78 Facebook users that have granted permissions to the above mentioned app have exposed over 100,000 accounts!

Fact: If you simply can’t move on and don’t trust your personal info on Facebook anymore, read how to delete your Facebook account directly from your iOS device!

4 Ways To Charge An iPhone! Which Is The Fastest?