One of the important changes noticed while testing out iOS 10 is that Apple has decided to modify the way users unlock their iPhones. The Slide To Unlock gesture, an Apple “trademark” for accessing the home screen of an iPhone has been replaced with the Press To Unlock action. Considering that the average user browses the phone tens of times a day, this change directly affects every iPhone owner. The debate has already started and you can share your opinion at the end of this article.

Touch ID remains the fastest way to enter the menu of an iPhone. However, there is often the case that your hands get sweaty, sticky and the fingerprint sensor doesn’t work. Your other option is to enter the Passcode. After several unsuccessful Touch ID readings the Passcode prompt is automatically displayed. However, if you want to access this feature faster, you now have to Press to home button to unlock instead of sliding to unlock. 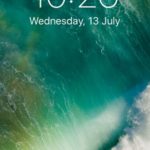 Press To Unlock vs Slide To Unlock
Because the traditional iPhone menu access gesture has been used for so long, it has become a reflex for all of us. This is why, at first sight, the change might feel unpleasant and it will take you some time to get used to it. However, considering that an user always places a finger on the Home Button in order to use the built-in sensor for unlocking, it’s the natural gesture to press it all the way in case the iPhone doesn’t recognize the fingerprint and won’t automatically unlock. 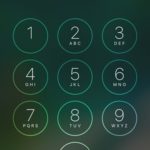 The press activates the Passcode request screen and you can type your 4- or 6-digit combination to open the home screen menu.
Important: Passcode request can be turned off, but I strongly advise you to keep it on, or the data on your iPhone becomes extremely vulnerable.
Fact: If you’re working in fields like gardening, mechanics or anything else that involves dirt, Slide to unlock is indeed the better option because you can use a screen protector to avoid scratching the screen if hands are dirty. Pressing the home button could complicate things and add unwanted crud to the area. 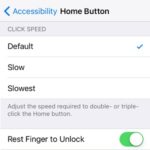 Starting with iOS 10 Beta 2 Apple’s software developers have introduced the Rest Finger to Unlock option. This allows users to unlock their iPhones by simply placing their thumb, or index on the home button, if the device is awake. This feature can be enabled or disabled from Settings -> General -> Accessibility -> Home Button -> Rest Finger to Unlock. While many find the opportunity helpful, others want to avoid accidental iPhone unlocking and prefer to have it disabled.
Fact: The current animation alternates the Press home to unlock with Press home to open messages. If you fail to unlock your iPhone from the first attempt the second option is displayed. This could be temporary though until fans get used to this new unlocking pattern.

Press To Unlock -> Push To Unlock
Apple never innovates without a purpose and in my opinion this iPhone unlocking change has also a long term functionality. That’s to prepare us for the physical disappearance of the home button. We can easily assume that future iPhone models will ditch physical buttons and will rely on tactile ones. 3D Touch might be used in the future for iPhone unlocking, by force touching the Touch ID reader on a tactile home button. Perhaps this is another reason why Apple wants us to forget the Slide to unlock gesture. What do you think?