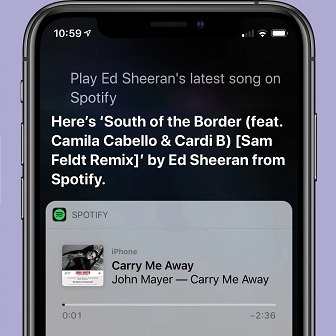 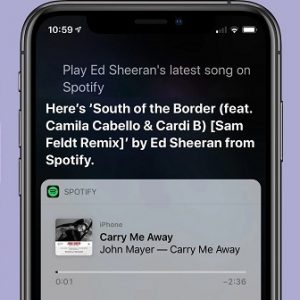 Asking Siri to play a certain song on Spotify.

Spotify has recently updated its app with Siri support. Thanks to iOS 13 and this latest update you can now use your iPhone’s virtual assistant to control music playback on your device. This feature is also available for iPads running iPadOS 13. All that you have to do is make sure that your Apple device runs the most recent Spotify version. Check the App Store and visit the Updates section. Make sure that Spotify is update to version 8.5.26 or later.

Now you can ask Siri to play a song, album or playlist “with Spotify”. The update also includes AirPlay support. The log informs that Siri can be used to control the Spotify listening experience on iPhone, iPad, CarPlay, AirPods and HomePod. More, Spotify is now also available on Apple TV. You can download it from the tvOS App Store or if you have the “automatically install apps” setting enabled on your TV set it will auto install on your device.

How To Control Spotify With Siri 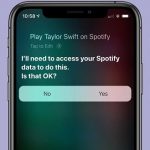 1. Wake Siri:
-> with the help of the ‘Hey Siri’ voice command.
Fact: For ‘Hey Siri’ to be available it has to be enabled. In the Settings app browse for Siri & Search and make sure that the Listen for ‘Hey Siri’option is enabled.
-> by pressing & holding the Side button until Siri reacts.
2. Ask for “play [song name / album name / playlist name] with Spotify.”
Tip: The first time you will ask Siri to interact with Spotify it will ask for permission to access the app’s data in order to be able to perform the task. Agree and you’re ready to go!

List Of Supported Commands
– Hey Siri play [song, artist playlist]!
– Hey Siri turn on/off shuffle or repeat.
Fact: Popular commands that are available with Apple Music can’t be used with Spotify yet: I like this song; Add x to my queue, Add x to my library; Add x to my playlist named y; Search for x.

Fact: Another improvement to the Spotify app that come in this most recent update is the Data Saver feature that is able to sync with the Low Data Mode setting on your iPhone or iPad. Low Data has been introduced in iOS 13 and is able to reduce the amount of data used by your Apple device when data connectivity is limited.

Other Spotify upgrades awaited by worldwide Apple fans are:
– Streaming over cellular or Wi-Fi connectivity on Apple Watch!
– Offline playing music from Spotify on Apple Watch!

Apple Watch To Be Shipped Only In June