A new 3D camera technology from Razer might be able to remove background from a headshot — as if there were a green screen behind the speaker.

With this camera that’s being developed by the gaming company Razer, the user could overlay that captured video over another image on the screen, like for a webinar presentation or video tutorial.

Imagine the personal brand recognition having your smiling face — accompanying your voice — in one corner of the screen during your next webinar presentation. And without the distracting box around your head that previous setups like this have produced. 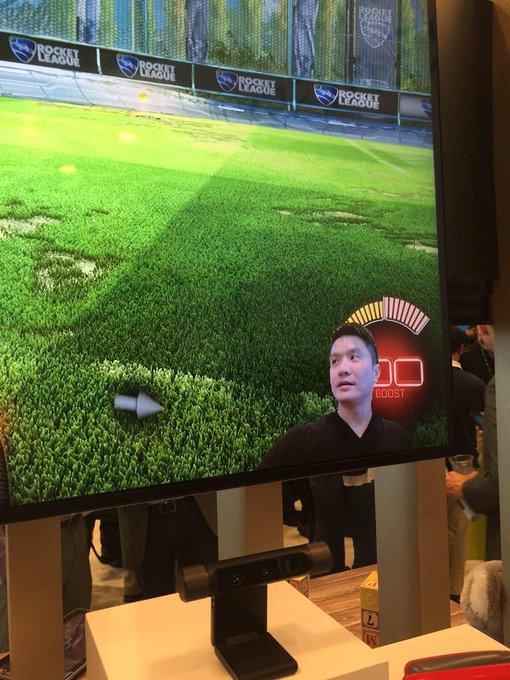 This camera was unveiled at the recent Intel Developer Forum held in May in San Francisco.

Razer, a company that specializes in connected devices and software for gamers, showcased a camera for a wide range of experiential applications, including virtual reality (VR) and gaming desktops with RealSense integration.

Intel RealSense is a platform that allows developers to implement gesture based interactions using 3D cameras. The platform was integrated into many different kinds of products, showing the limitless potential of this technology, including Google Project Tango, MemoMi Memory Mirror and Floating Display.

In a release on the company’s site, Min-Liang Tan, co-founder and CEO of Razer, says:

“Razer is excited to be working with Intel, using Intel RealSense technology to help pioneer work for game broadcasting, as well as with VR, with support from the growing OSVR movement. Gamers will, we expect, be able to enhance their broadcasting and VR experience in unprecedented ways.”

Cameras that use RealSense have a 2D camera for regular photo and video, an infrared camera and an infrared laser projector. They are combined to deliver an immersive experience so the user can see and gauge the distance between objects and separate them from background layers for better recognition.

A simple application of this technology is taking a picture and being able to focus on the different backgrounds in the image, so say goodbye to bad pictures. For small businesses that rely on great photographs for their website, this means you can take the pictures yourself and no one will be the wiser that it wasn’t taken by a professional.

The Razer camera has automatic background removal, so if you are in a video conference, a webinar or delivering live tutorials, you can replace the backgrounds with subject appropriate images, data or video. This gives your presentations a professional look without the cost of hiring a production manager.

The camera also has 3D scanning, motion and gesture recognition. For small designers, construction and remodeling firms all they have to do is scan the location.

Based on the scan, these firms can measure the space and bring real-world objects and bodies into the virtual space, showing the homeowner many different possibilities.

The motion and gesture recognition technology lets gamers see the reaction of the people they are playing with. According to Intel, the background removal feature, depth sensing camera and software combine to isolate the face and integrates it into the video.

Razer has developed a functionality it calls Twitch, which captures these reactions in real-time. Whether it is gamers or conferencing participants, this is a feature that can be used for a more immersive experience by capturing what people are feeling.

Last, but definitely not least, is the VR feature Razer plans to use. Along with its Open-Source Virtual Reality (OSVR) ecosystem and Hacker Dev Kit, it enables programming for any variety of VR technology. The OSVR is a framework industry players are adopting for an open standard for VR input devices, games and output.

Xem thêm:  Light Phone: A Mobile Phone that Only Makes Calls, Nothing Else

When mounted to the outside of a headset, the Razer camera can be used to map out and visualize the real world, even if the VR unit is blocking your view.

This type of integration of the virtual and real world in real-time can be applied in anything from gaming to virtual training, treating phobias, taking tours, watching sporting and entertainment events and more.

Gizmodo reports the Razer camera will be available with the Twitch functionality in the first quarter of 2016.

Well, the new technology is being touted as particularly useful for gamers who stream themselves playing video games and want those watching to see their reactions and facial expressions during game play as well. But there’s no reason small business people couldn’t adapt this technology to the world of online presentations when it finally comes out.

When the Intel Developer Forum (IDF) was first held in 1997, the goal was to provide a venue for technologist with access to Intel products and products based on Intel products. Although the company is known as the world’s largest and highest valued semiconductor chip maker, it has grown to include several different segments.