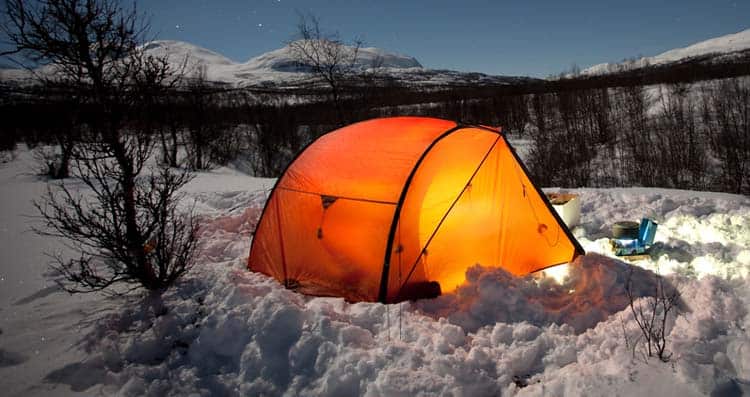 You’ve just bought that new tent and you’re super excited to test it out. But, it’s winter time and you realize that your tent is only rated for three seasons so now you’re asking yourself, “Can a three-season tent be used in the winter?” Fear not, because we’re here to help you understand what “three-season” actually means and if you can use your tent on a winter camping trip or if you’ll have to cough up some dough for a four-season model.

It turns out that this is actually a bit of a tricky question because it really depends on the tent in question and the winter conditions you’ll face. While there are, indeed, some three-season tents that would be fine in mild winter conditions (think temperatures just below freezing, light winds, and no snow), many of these tents wouldn’t hold up well in a whiteout.

Differences Between a Three Season And a Four-Season Tent

Generally speaking, three-season tents are designed to be lightweight while still protecting you from the wind and the rain. But, these lightweight materials mean the tent can only withstand so much abuse in the elements before it breaks in high winds or under the stress of stow. Plus, three-season tents are designed to be highly breathable so you don’t overheat in your sleeping bag.

On the other hand, four season tents tend to be made with beefier materials so they can withstand heavy winds and significant snow accumulation. They also usually have a two-wall construction to help you stay warm at night, but this means they aren’t as well ventilated. Due to their unique construction, four season tents tend to be heavier and bulkier than their three-season counterparts but hold up well in foul weather.

Pro Tip: Three-season tents are a good choice for those who make frequent trips to exposed, high-elevation destinations. While very sturdy, they are not as fully fortified for harsh winter weather as 4-season tents.  – REI

How Cold is Too Cold for a Three-Season Tent

If you’re worried about being cold in your tent, you really should be looking at your sleeping bag and clothing choices. While your tent is important for stopping the wind and it can trap a bit of heat, it’s not designed to be an effective insulator.

On the other hand, a sleeping bag rated to an appropriate temperature rating for the conditions you’ll be facing is more likely to keep you warm. Combined with a sleeping pad with a high R-value (a measure of sleeping pad insulation) and an abundance of warm layers, a quality sleeping bag will make a bigger difference to your warmth than a four-season tent.

Xem thêm:  Why Use A Bedroll? A Quick Primer On The Pros of a Bedroll – Decide Outside – Making Adventure Happen

What to Look for in a Three-Season Tent

Weight – If you’ll be backpacking with your tent, you won’t want to lug around a brick. Even if you’re car camping, you still won’t want to have to move an excessively heavy tent, so it’s nice to have a tent that’s reasonably light. Thus, a lightweight tent can make a huge difference in the overall quality of your camping trip, but it’s important to note that light tents tend to be more expensive or less durable.

Ease of set-up – While the ability to set up your tent quickly is a skill that takes time and practice, a tricky tent set-up is a surefire way to get frustrated right as your camping trip begins. Watch videos online of people setting up the tents you’re considering and picture yourself doing it, too. If it takes someone else 45 minutes to set up the tent, it may take you just as long.

Packability – This is especially important if you’re backpacking, but even if you’re car camping, you won’t want a tent that takes up half of your trunk. A tent that packs down into a small size is fantastic for reducing the overall bulk of your gear and makes it much easier to manage.

Durability – The last thing you want is to spend a lot of money on a tent only to have it break on your first camping trip. Sure, accidents happen, but any tent worth considering should be durable enough to last years, even for the most adventurous of campers.

Xem thêm:  What Is The Spiritual Meaning?

Capacity – If you camp alone, you’ll probably be happy with a 1- or 2-person tent (depending on how much gear you want to keep inside with you). But, if you tend to camp with friends or family, you may want a larger tent, especially if you’re car camping. Be sure to find a tent that can comfortably fit all of your camping companions and your gear.

Do They Make Three-Season Tents for Families

There are a number of gear manufacturers that make three season tents for larger groups (6 or more people), which can be great for families. That being said, these tents tend to be expensive, heavy, bulky, and tricky to set up. Especially if you have a lot of children, you may find that having two or more separate small tents will give everyone the space they need to be comfortable while also being a bit more economical.

Now that we’ve discussed the difference between three- and four-season tents at length, it’s time to return to our original question: “Can a three-season tent be used in the winter?”. Our answer? In most cases yes!

If you live somewhere with mild winters and you have a warm enough sleeping bag, you’ll probably be just fine in your three-season tent. But, if you try to take your three-season car camping tent on a winter backpacking trip in the Rockies, you’ll quickly find that it’s not up to the task.

Is Fleece a Breathable Fabric? Or Is That A Myth? – Decide Outside – Making Adventure Happen

Does A Campfire Keep Animals and Bugs Away? – Decide Outside – Making Adventure Happen