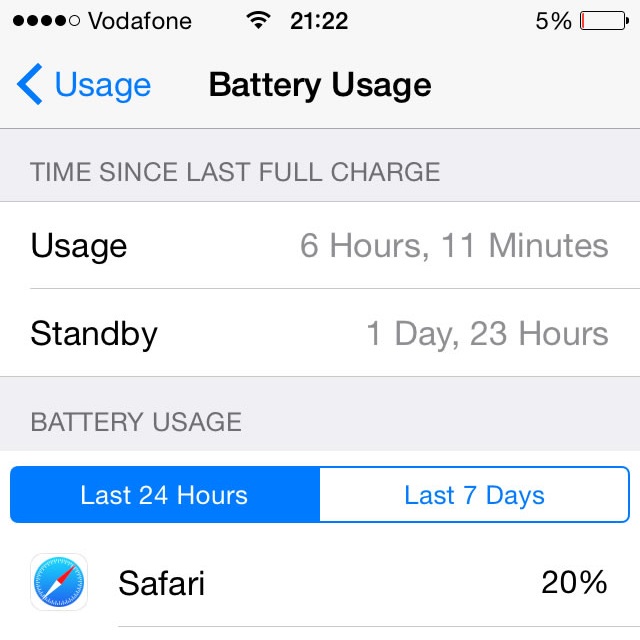 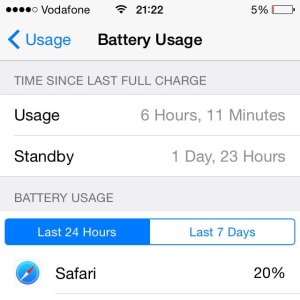 If you’re looking for additional reasons to upgrade to iOS 8, the Battery Usage App can be a great convincer. This addition means that you won’t need to download a 3rd party application, from the App store, in order to check how your iPhone’s battery is draining.

More, Apple have also included a handy stat that shows how much time has passed since an iPhone was fully charged. The user is also informed about the duration that the device spent in standby and how long was it actually used.

The actual Battery Usage menu provides stats for the last 24 hours and for the past 7 Days. Figures show the percentage of the battery drained by each app. The most consuming ones being listed first. This way you can manage your iPhone battery more efficiently and notice if an app is burning more resources than expected.

How To Access Battery Usage
To check this new built-in battery app, tap on Settings -> General -> Usage -> Battery Usage. Now, you can see how much time has passed since your iDevice was fully charged and read the detailed ‘Battery Usage’ menu.
If your device is not properly optimized you will be also prompted with a few ‘Battery Life Suggestions’. One of them mentions the advice of reducing brightness, by using the Auto-Brightness setting. Another recommends to use WiFi instead of cellular data network in order to save battery. 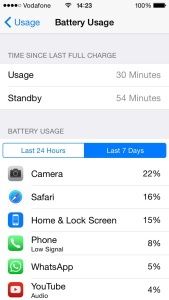 iOS Battery Draining Apps
If you check the conducted battery consumer apps you will notice that some apps use significantly more battery life than others. There are a few simple reasons that can lead to this outcome:
– you use a specific app much more often as others.
– app runs in background all the time and drains power although you think that it isn’t used
– app is unstable, crashes a lot and is restarted and thus drains your battery. In such cases the Battery Usage feature is very useful because it helps you detecting the app that is causing unexpected battery drainage and forces you to charge your iPhone much more often than usual. If this happens simply check for an update, or uninstall the app.
– Tip 1: avoid using your iPhone in an environment with low carrier signal, or your battery will drain faster! This is highlighted by the ‘Phone’ app, as you can notice in the ‘Battery Usage’ list, provided nearby.
– Tip 2: Efficiently set up the Background App Refresh setting on your device to extend Usage time.

As a conclusion the Battery Usage app is very handy when your iPhone is acting strange and you feel that the battery is draining faster than usual. Use it to detect apps that have abnormal usage rates and find a solution. Also, I recommend you to activate the Battery Percentage Indicator. It shows your battery juice in real time and you can immediately notice if sudden drains occur. More, it makes you fully aware of your iPhone’s battery status and allows better charging management. Last but not least, you can consider a battery strength test to see if there if your device is encountering a hardware power problem.

Xem thêm:  How to Check & Delete Voicemail on Your iPhone

iPhone 13 Apple Music Bug After Restoring From A Backup