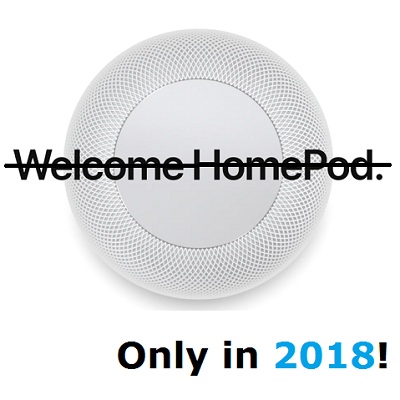 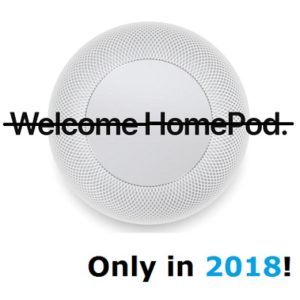 If the HomePod was one of the gadgets on your Christmas wish list, unfortunately you have to strike it out, because Apple has just announced that it has delayed the launch of its smart speaker until ‘early 2018’. And ‘early 2018’ in Apple’s terms can mean anything between the February – June time frame, which adds 3 to 5 more months of waiting if you want to purchase the HomePod. The Cupertino-based tech giant has announced this new product on June 5, during the WWDC 2017 keynote, in an attempt to lock out competitors like the Amazon Echo hands-free speaker that you can control with your voice.

With the December deadline missed, Apple’s HomePod is another new product that was delayed from launch after last year’s wireless Earbuds. The AirPods were scheduled to premiere in October 2016, but have been delayed for the month of December, of the same year. However, they did made the cut for the winter holidays and the launch was an instant hit. Even, now one year later, Apple’s revolutionary wireless earphones still don’t have a matching competitor!

To get back to the HomePod though, Apple’s intelligent speaker will cost $349 and will be shipped first to customers in the United States, the United Kingdom and Australia, three exclusive English speaking countries that make the perfect test ground for this first generation product. Of course that the ‘Hey Siri’ feature will be used for the HomePod’s hands-free control and because the virtual assistant will only accept voice commands for playing music and fulfilling various other HomeKit compatible commands, language support will be the primary impediment for expanding the product to other markets.

Fact: Apple hasn’t mentioned a specific reason for the HomePod launch push back, other than the “we need a little more time” request. The same claim was used when the AirPods release has been postponed a little over one year ago!

Xem thêm:  How To Know If Your iPhone Is A Retail Or Refurbished Unit

Update: We’ve received a series of inquiries stating the the iPhone X was also a delayed Apple product. No, the 10th anniversary iPhone wasn’t postponed. The company announced from the get-go that the bezel-less iPhone will be released on November 3, a couple of weeks later than the iPhone 8 and 8 Plus!

Group iOS Notifications By App And Tweak Their Order